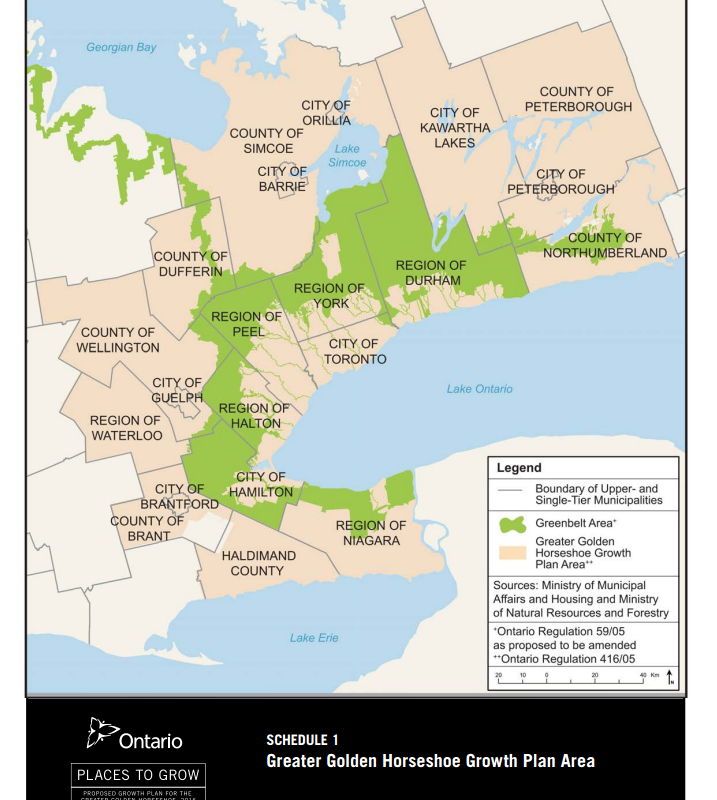 A new policy proposed this week promises good things to come to Ontario’s streets. The Ministry of Municipal Affairs and Housing released its Proposed Growth Plan for the Greater Golden Horseshoe (GGH) 2016, as an update to the original 2006 version, and key changes include increased support for active transportation and a directive for municipalities to adopt a Complete Streets approach.

The Growth Plan encompasses a collection of regions and municipalities radiating out from Toronto and extending westwards to Kitchener, Guelph, Hamilton, Brantford and Niagara, eastwards to Peterborough, and north to Georgian Bay, including Barrie and Collingwood.  The plan, which covers urban areas, works in tandem with three other provincial land use plans governing rural and natural areas, and which are also undergoing review.

The proposed revision increases the emphasis on building compact and complete communities within the Greater Golden Horseshoe, meaning communities with a full range of housing options and within which people of all ages and abilities can conveniently meet their daily needs, including for work, shopping, and services.  Such communities provide a wealth of destinations that make walking and cycling viable, and the updated plan includes stronger support for the “safe, comfortable and convenient use of active transportation” (2.2.1.3d(i)).  Municipalities are directed to “prioritize active transportation, transit and goods movement over single-occupant automobiles” (3.2.2.4c), and may reduce the amount of parking that they require developers to build near major transit stations (2.2.4.7d).

For cyclists, in particular, important additions include the requirement to provide bicycle lanes near major transit stations and the clarification that bicycle parking in these areas should be secure (2.2.4.5b).  A loophole is also partially closed on building comprehensive and integrated active transportation networks; whereas before municipalities were only directed to provide dedicated lane space for bicyclists on major streets where feasible, now, if deemed infeasible, another safe and convenient alternative will be offered (3.2.3.4b).

Perhaps most exciting of all, though, is the directive that, “[i]n the design, refurbishment or reconstruction of the existing and planned street network, a complete streets approach will be adopted that ensures the needs and safety of all road users, including pedestrians, cyclists, transit-users and operators, and drivers of cars and trucks are considered and appropriately accommodated” (3.2.2.3).  This policy represents a major step forward and makes Ontario the first province in Canada to adopt a Complete Streets approach.  A number of municipalities have guidelines or policies in place already, are working on them, or have committed to them (for example, Waterloo, Toronto, and York Region), but many others do not.  If included in the final Growth Plan, a new way of designing and re-building streets will be implemented across the region.

The Proposed Plan is now open for feedback from the public until September 30th, 2016.  You can submit your comments online, or find the times and locations of public open houses by visiting the Ministry of Municipal Affairs and Housing’s website.