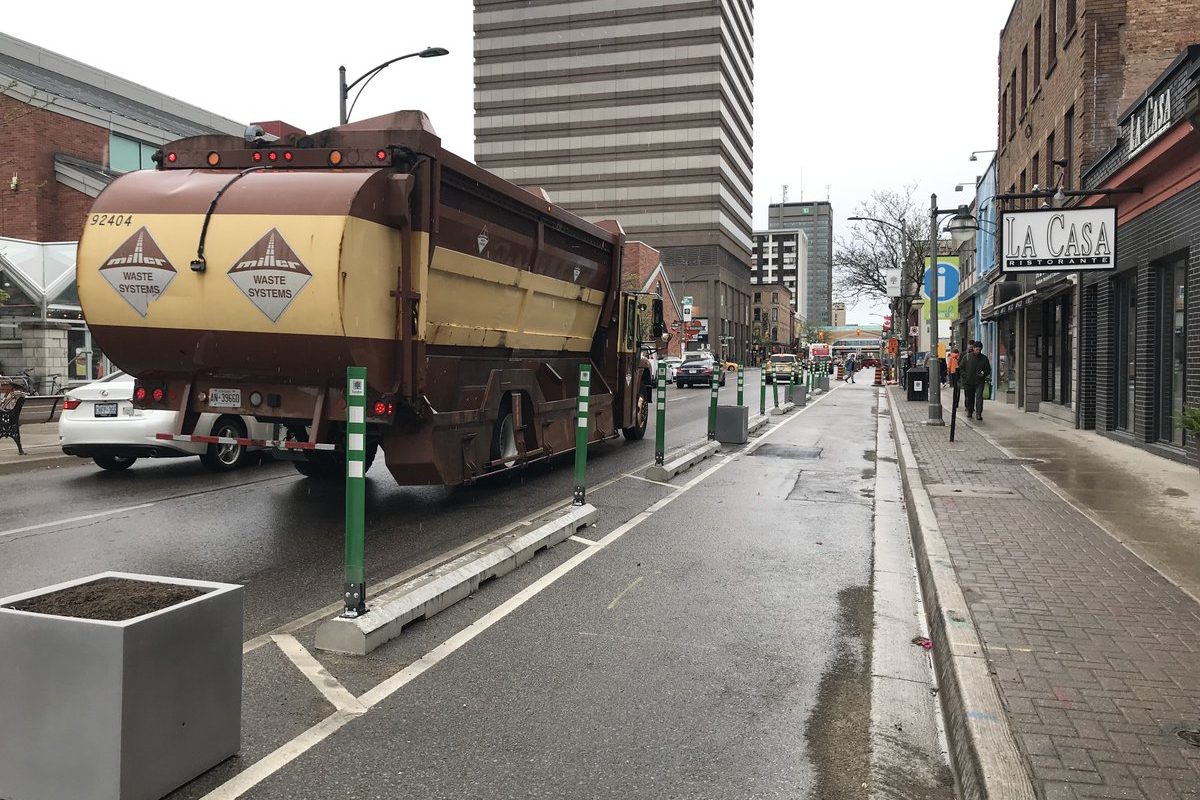 Last month, the Ontario Traffic Council awarded London, Ontario with the Transportation Planning Project of the Year for the city’s Complete Streets Design Manual. The document’s purpose is to provide guidance towards the implementation of Complete Streets in London. The manual serves as a guide for practitioners, policy makers, and citizens involved in the process of creating the future plans and policies surrounding street design in the city.

The manual, created by WSP Canada for the City of London, complements London’s award-winning Official City Plan (“The London Plan”) along with its transportation and cycling master plans. One interesting aspect of the guide is that it demonstrates design strategies to retrofit the city’s suburban style streets to make them more attractive for pedestrians and cyclists.

The guide defines a clear set of priorities for the future of London’s streets, highlighted by the city’s Vision Zero target – the concept that no loss of life as a result of traffic-related collisions is acceptable. Additionally, the manual prioritizes the creation of functional, attractive street environments that better serve pedestrians and cyclists.

The design manual walks the user through the steps required to implement Complete Streets – from inception and planning, to monitoring and progress tracking.

“The London Complete Streets Design Manual includes many tools to help practitioners make decisions that are a departure from the status quo and in line with Complete Streets principles,” says Jason Neudorf of WSP. “The manual also builds on the unique street typology in the City’s Official Plan.”

Last year, while the document was still in progress, concerns were raised by local cycling advocates. Prior to finalizing the guidelines, there were rounds of stakeholder consultation including a well-attended community workshop featuring TCAT’s Complete Streets Game.

“Now that the manual is complete, it’s exciting to see it actually getting applied,” says Neudorf. “The recent implementation of the King Street Cycle Track is an excellent example of this.  The design of the transit stops along this corridor together with the continuous separation through bollards and pre-cast curbs reduce the potential for conflict between buses, pedestrians and cyclists. It’s a great example of Complete Streets in action and will hopefully be a sign of what is to come.”

The benefits of Complete Streets can be seen in cities of all sizes across Canada. In 2010, a Complete Street transformation was completed in nearby Kitchener, one that saw the city install an innovative redesign with enhanced pedestrian features along King Street, a major downtown street. The upgrades included new benches, planters, and summer patios which increased daily pedestrian counts from an average of 3,000 to 8,900 after the changes were implemented.

London’s manual concludes with tactics to effectively monitor and advance Complete Street development in the future. An interactive Complete Street Audit Tool accompanies the guide. The tool is designed to be used to assess the completeness of an existing street, as well as to analyze the effectiveness of a proposed design for a street.

By using metrics such as Level of Service, a measure that is primarily used to categorize traffic delay, along with spatial analysis and road safety assessments, London plans to continually evaluate the effectiveness of the new streets and communicate the results with stakeholders.

The new design manual could propel London to be one of Canada’s leaders in building streets designed to be safe for everyone, of all ages and abilities. Under direction of the new guide, London’s street network is expected to be more human-centric moving forward.