In 2015, the Ville de Baie-Saint-Paul redeveloped Saint-Jean-Baptiste Street between Ambroise- Fafard and Saint-Pierre Streets. This project was intended to foster economic activity in Baie-Saint-Paul and preserve a heritage area. 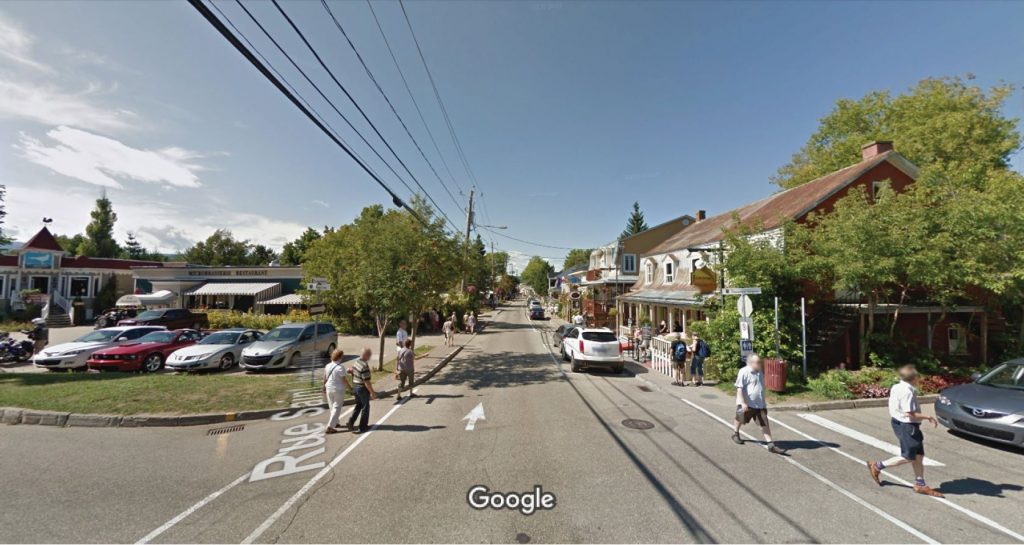 In 2015, the Ville de Baie-Saint-Paul redeveloped Saint-Jean-Baptiste Street between Ambroise- Fafard and Saint-Pierre Streets. This project was intended to foster economic activity in Baie-Saint-Paul and preserve a heritage area, in accordance with plans formulated during the Sommet économique de la Ville in 2003. The street belongs to a sector which has been the subject of a site planning and architectural integration program for the past 12 years. Completion of the work was celebrated by opening the street for a day to pedestrians, and organizing family activities.

The redevelopment restored use of the street to pedestrians by tripling the space allotted to them, creating small public plazas at two intersections and widening the sidewalks.

The project meets, and even exceeds, the standards proposed by the Municipalité amie des aînés (MADA) project (for senior-friendly cities). The designers chose not to install curb ramps. Instead they opted for a very low sidewalk allowing for comfortable use of the entire public space when the street is opened to pedestrians. Also, rainwater is drained down the centre of the roadway, which limits water accumulation at intersections. This ensures that pedestrians don’t get splashed.

Reducing the speed limit to 30 km/h, narrowing the roadway and expanding the human presence have helped slow traffic.

The heritage character of the architecture of this street has been protected by a site planning and architectural integration program for the last 12 years. The addition of benches, flower beds and Morris columns makes the street more user-friendly and facilitates its use by citizens.

For every project, the Ville de Baie-Saint-Paul establishes a project office comprising civil servants from various disciplines, mandated professionals, elected officials and community representatives / citizens. The aim is to ensure a consistent approach to projects and their acceptance by the community.

Planning the redevelopment of Saint- Jean-Baptiste Street was not a straightforward process, since the municipal council was divided over the level of investment initially proposed. The community launched a fund raising campaign in order to finance the street’s makeover.