In 2016, the City of Gatineau redeveloped Laurier Street between des Allumettières Boulevard and Dussault Street. The new facilities were designed to encourage active transportation and to revitalize the city centre in preparation for the 150th anniversary of Canadian Confederation and the Mosaïcultures internationales exhibition held in Jacques-Cartier Park. 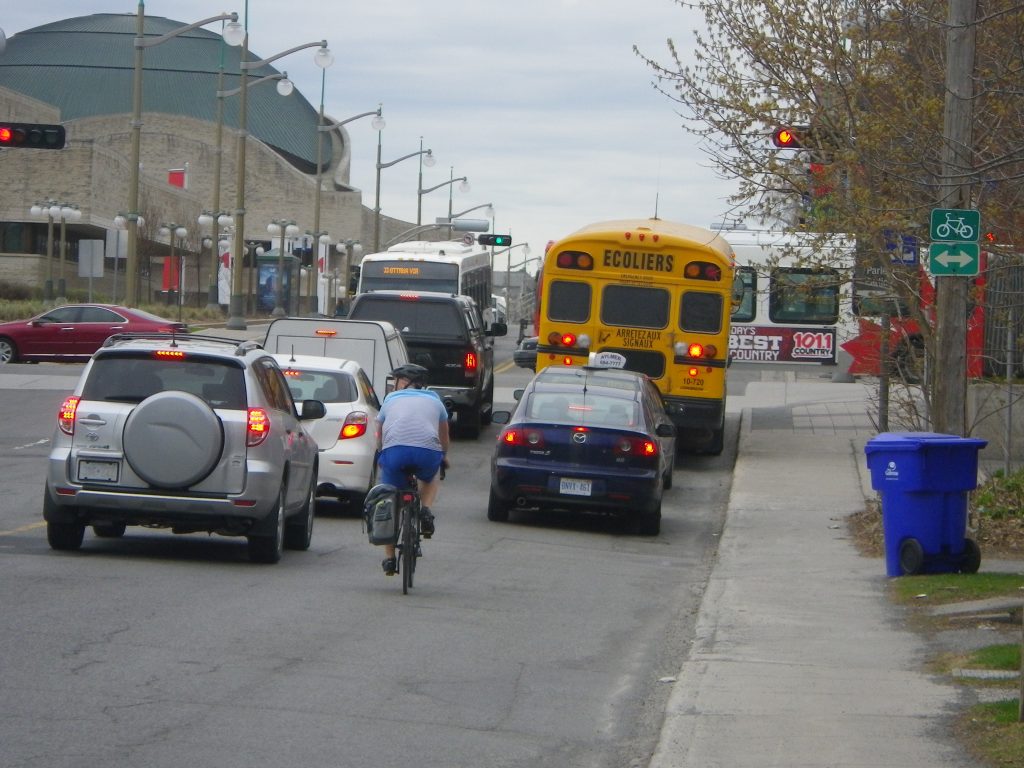 In 2016, the City of Gatineau redeveloped Laurier Street between des Allumettières Boulevard and Dussault Street. The new facilities were designed to encourage active transportation and to revitalize the city centre in preparation for the150th anniversary of Canadian Confederation and the Mosaïcultures internationales exhibition held in Jacques-Cartier Park. Thus, a new connective cycling path was created as proposed in the Programme particulier d’urbanisme du centreville  – 2009 (PPU). Since the completion of this project, the City of Gatineau has been working to adopt a Friendly Streets policy. In addition, it has devoted significant effort to increasing the practice of cycling, in particular by revising, in 2017-2018, its Plan directeur du réseau cyclable à l’horizon 2025.

Pedestrian infrastructure
On average, the sidewalk was 1.5 m wide before work began. As a result of the work, the width of the entire active transportation corridor, including the cycling path, the sidewalk and the buffer zone, now totals on average 4 m on either side of the roadway up to Sacré-Coeur Boulevard. The next segment, ending at Dussault Street, provides a 3 m wide space for active travel on each side of the street.

Universal accessibility
The creation of a buffer zone between the roadway and the cycling path allows curb cuts to be installed without introducing a perceptible change in elevation for users of the cycling path and the sidewalk.

Cycling infrastructure
One-way cycling paths were installed on either side of the roadway. This cycling route serves as a useful link in the  Laurier Street axis, which is consistent with the aims of the PPU, and serves the recreational clientele of Jacques-Cartier Park. The first 600 m of the cycling paths, up to  Sacré-Coeur Boulevard, are raised above the level of the roadway. They then continue level with the roadway for a distance of 300 m, over which they are demarcated by a white strip on the pavement. At major intersections, green colouring was applied to the pavement to enhance visibility of the cycling routes.

Public transit
Five transit stops of the Société de transport de l’Outaouais (STO) were demarcated by new pavement markings. The redevelopment also included an extension of the sidewalk on the east side of Sacré-Coeur Boulevard up to Dussault Street, creating more comfortable waiting areas.

Traffic calming
Eliminating a northbound traffic lane between des Allumettières and Sacré-Coeur Boulevards reduced the road capacity of the axis and helped calm traffic speeds by narrowing the width of the roadway.

Landscaping and furniture
Six bicycle racks were added in 2018 to facilitate parking and a self-serve repair station was installed.

Participatory process
Meetings were held with residents and merchants affected by the decrease in the number of parking spaces. In addition, a partners’ committee was formed that included members of Action vélo Outaouais. During consultations concerning the Plan directeur du réseau cyclable, citizens were given access to a digital portal and a total of 2400 location-based comments were gathered.