Clearwater is a small rural community in British Columbia, located about 125 km north of Kamloops. It was featured in TCAT’s backgrounder on Rural Complete Streets (2016).

The District Municipality of Clearwater is a small rural community of just over 2,000 people. In 2013, they conducted a Road Network Rationalization Study, which resulted in a Complete Streets approach to roadway design, although the term itself is not used. The study developed a new road hierarchy and classification, based on each road’s primary function and surrounding land use. Three road types were identified: Urban Collector, Rural Collector and Local.

These new road classifications were implemented through a Road Cross-Section Bylaw, created to provide a guideline for designing roads that accommodate all modes of transportation: walking, cycling, driving, and shared spaces (Clearwater Road Network Rationalization Study and Draft Bylaw, p. 10). The bylaw requires that:

In addition, maps designate three context areas based on surrounding land uses: Village Centre, Suburban Core Area, and Natural, Rural. The primary function of a road is also classified from the user’s perspective: primarily for mobility (uninterrupted travel), access (some interruptions) or destination (many interruptions). Based on these and a number of additional characteristics, space types are established, which are then demonstrated through sample cross-sections.

The by-law was adopted by Council in 2013 as the District of Clearwater Subdivision and Development (Highway Standards Bylaw No. 111, 2013). The Road Network Rationalization Study included a proposed implementation plan for the retrofitting of existing roadways that extends until 2030.

In 2016, TCAT conducted a scan of Complete Street best practices in rural municipalities. The objective was to look at the unique challenges that rural areas face in adopting and implementing Complete Street policies and also to share some of the success stories that have come out of these communities. TCAT released a backgrounder on Rural Complete Streets featuring case studies in the Region of Waterloo (Elmira), the City of Thunder Bay and the District of Clearwater.

The district municipality of Clearwater (population 2,331) is located an hour and a half north of Kamloops. In 2013, it undertook a study on Road Network Rationalization and a Road CrossSection Bylaw Framework. The community was engaged in a discussion about the connections between road design, active transportation and health outcomes, including through a mobile public open house that had residents moving from station to station on foot, by bicycle and on in-line skates. The result was a Road CrossSection Bylaw, which establishes new street types based on surrounding land uses and types of user. 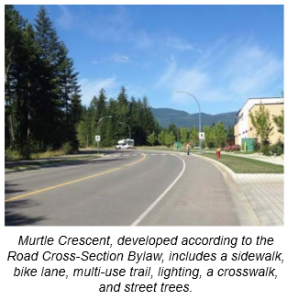 The Bylaw recently led to significant improvements to Murtle Crescent. Previously unpaved, the roadway was infrequently used by pedestrians and cyclists, despite providing a connection between a subdivision and a park, a library and shopping. With a new subdivision being proposed, the municipality was able to use its Road Cross-Section Bylaw to require the developer to include active transportation elements in its design and share the cost (the municipality contributed $58,000, or 50%).

Unlike most older streets in Clearwater, the new Murtle Crescent includes a sidewalk on one side, a multi-use path on the other, a crosswalk, street lighting, and trees, and has seen a substantial increase in users. After the project’s completion, a community group raised funds to add a splash pad to the park where the road leads and Clearwater’s recently completed Trails Master Plan proposes to extend the trail from the park to a home for seniors.