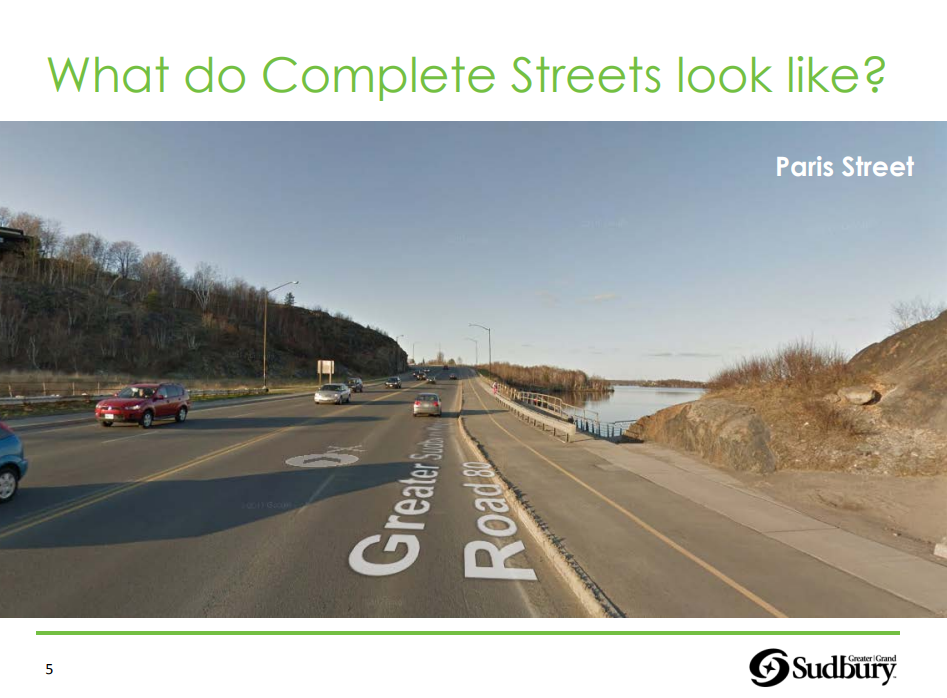 According to Marisa Talarico, in Greater Sudbury’s Infrastructure Capital Planning Division, responsible for developing their Complete Streets policy, a resolution is advantageous because it provides clearer and stronger direction for implementation. While Greater Sudbury’s Complete Streets policy was initially defeated last month at the Operations Committee, City Council overturned that decision and voted overwhelmingly in favour, in a vote of 10-1. In the intervening month leading up to the Council vote, Ms. Talarico, along with her colleagues, successfully addressed questions that Councillors had about the new policy, and the outpouring of community support was also critical to the policy moving forward.

Greater Sudbury is a major centre in northern Ontario characterized by both urban and rural areas. One of the benefits of Complete Streets is that it does not rely on a singular design prescription, which was one of the factors leading to Council support. In anticipation of the policy, every capital project delivered last year was considered from the perspective of all road users, including pedestrians and cyclists.

The Draft Corridor Strategy for busy Lasalle Boulevard, also recently approved by Council, plans for a Complete Street redesign of one of the City’s busiest commercial corridors, and a cycle track is planned to be constructed on Paris Street and Notre Dame Avenue in the coming years, with design getting underway this summer.

The next steps for Greater Sudbury’s Complete Streets Policy are the preparation of a business case to develop Complete Streets Design Guidelines and an Implementation Strategy to be considered during the 2019 budget process. This is all good news indeed. No matter your age, ability or mode of choice, Greater Sudbury’s roads will soon be more complete and safer for everyone.