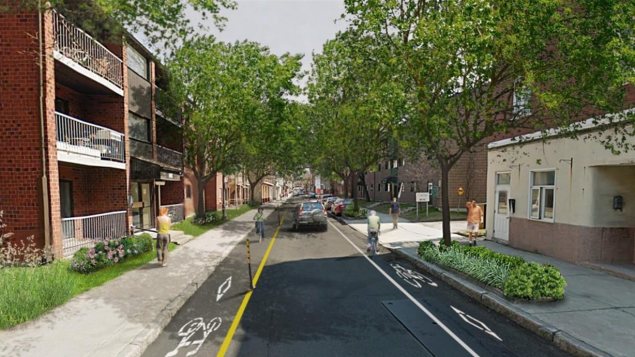 In terms of Central and Eastern Canadian municipalities, our search revealed that so far only Toronto possesses dedicated Complete Streets design guidelines in a standalone document. While Toronto’s ambitious design guidelines were completed earlier this year, when presented to the Public Works and Infrastructure Committee in February 2017, the Committee referred the guidelines back to staff requesting further information on several issues. An implementation strategy, including training and capacity-building for staff and contractors involved in street design and delivery, has also not yet been produced.

St. Thomas, Ontario has emerged as one of the most ambitious Complete Streets municipalities in Canada. It does not have a design manual, but it does have a policy document featuring an extensive catalogue of already implemented Complete Streets redesigns on a wide variety of street types. Complete Streets approaches are presently included in numerous municipal streetscape design manuals, but many of these are not municipality-wide, and only apply to downtowns or intensification areas.

However, there is still much to celebrate with Complete Streets in Central and Eastern Canada. One small, but hopefully growing trend is the inclusion of not only all modes, abilities and ages in Complete Streets approaches, but also accommodating users of all socioeconomic backgrounds. Easily accessible and convenient active transportation and transit can be a major benefit to low-income people, particularly those who are unable to afford a private automobile. Presently, only the City of Cornwall and Hastings-Prince Edward Counties include this broader approach in official documents, but hopefully as Complete Streets policies become more developed other municipalities will follow suit.

At the moment, a very strong foundation for Complete Streets exists throughout Central and Eastern Canada, with a very high percentage of major cities including Complete Streets in at least one formal policy document. Many smaller cities and rural municipalities are also incorporating Complete Streets into their Official Plans, Active Transportation Plans, and Transportation Master Plans. In May 2017, Ontario became the first Complete Streets province through updates to the Growth Plan for the Greater Golden Horseshoe. However, there is a pressing need for Complete Streets policies and approaches to be translated into action through dedicated policies and design guidelines, detailed implementation plans, and adequate and predictable funding for making streets work for all ages, abilities, modes and socioeconomic backgrounds.